From W3AXL Wiki
Jump to navigationJump to search 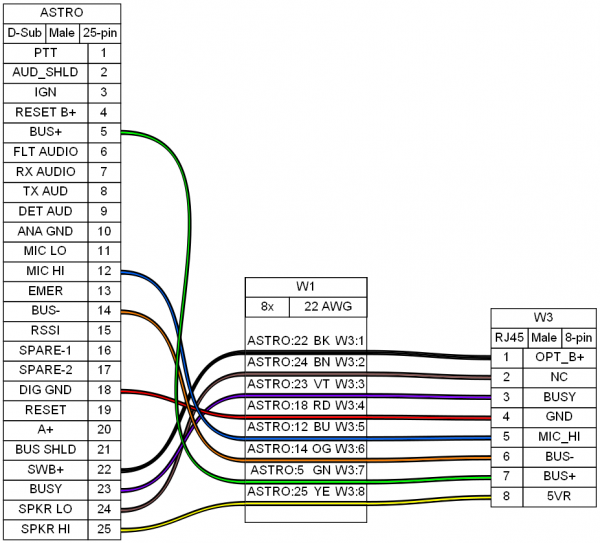 Note that inside the rubber boot of the W3 head is an RJ45 connector. Motorola is very inconsistent with their RJ45 pin numbering, but in this case pin 1 is the standard RJ45 pin 1 (far left with tab facing down). The colors used in this diagram are also the correct wire colors found in the OEM W3 cables.

Astro Spectra Depot is able to save created codeplugs as .srec1 files. These are basically the standard s-record files mentioned above, with some extra data to allow them to be read/written by the Depot application. Normally to write these to the radio, you'd use a SmartRIB and a FlashKey (the parallel port kind) and do it straight from depot. Since 99% of the population has neither of those, we have to force the data into the radio another way. That requires a little extra work to get the srec1 files into a usable format for the "usual" tools mentioned above.

When you convert the bin files from the depot s-records, they have 5 extra bytes at the beginning of the file compared to a standard s-record directly read from a radio. My best guess is this is an artifact of the extra header data for Depot. This extra data is enough for the radio to reject the record with a Fail 01/92, and become unresponsive in CPS until a new record is written. Removing the first 5 bytes allows you to then write the binary files directly to the radio with MotoTools. If you want to go the MTSXLab route, you'll have to convert them back to S-records first.